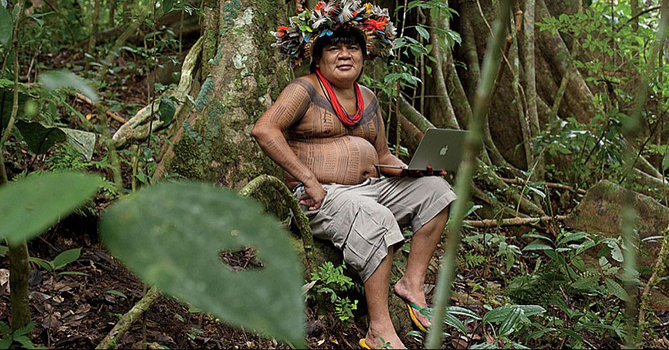 In one word? Yes!

According to the classic Hot, Flat and Crowded book by Prof. Thomas L Friedman, the challenge ahead for us is to create a system that takes into account the 3 main points of “climate weirdness” (like the author likes to call it):

(3) Innovation / education (we have to intensify our knowledge sharing in order to achieve breakthroughs to create a new generation of the Earth’s guardians).

How could we build such a system in such a short time? Well, maybe the answer is that we do not need to build one from scratch but utilize what we already. That is, we need to utilize the Internet.

Thinking along those lines, a businessman, a native Brazilian tribe leader and a group of rubber tappers built one of the most forward-thinking initiatives in Amazon Rain forest protection – the “Yorenka Atame Forest University”.

A university, which is located literally in the middle of nowhere in the Amazon Forest (accessible only by boat), forms a center where the Amazon’s stakeholders share knowledge, later applying what they learn back to the forest.

The university has two classrooms, a library and a guest home for 40 people, but what makes it unique is the vision of the university, which has been crafted by the native Brazilian Ashaninka tribe leaders and other environmental leaders such as Chico Mendes (a Brazilian rubber tapper, unionist and environmental activist murdered in 1988 by ranchers opposed to his activism).

Their vision conveys the main point that the forest itself teaches how to preserve the forest.

The challenge faced by the “white men” was how to introduce useful resources such as technology (video cameras, computers and Internet) without jeopardizing the traditional culture of the native Brazilians.

After long debate it was decided to implement the technologies.

The wise decision started to show results and illustrates how the Internet could play an important role in the protection of our global resources.

In 2004, a Peruvian “wood hunter” group got into the area, (in the past when such invasion occurred, the only way out would be to engage in deadly combat (which usually contributed to the native Brazilians drop in numbers) but this time using the “white-man” technology, the native Brazilians started sending out e-mails that reached the mass media and the government and in a couple of days a military force came to rescue the native Brazilians.

The Internet became the point of communication not only among the tribes (some of the tribes live hundreds of miles apart) but also with the world.

So, if the Internet works for protection. Can it work in other areas of Climate Change? , The answer is “yes.”

Innovation and education have been covered by the millions of Websites focusing on “the green issues” by providing valuable resources and tools that enable anyone to re-think, re-create and “react” on our climate change challenges.

Another example of how the Internet can be such a powerful tool was the tweetsgiving.org website that raised over $10,000 in just 48 hours through the power of Twitter and social media. 336 contributors collectively raised enough money to fund a new classroom for a school in Tanzania.

The Internet can positively contribute to a greener society. What we may see next is the “Web Green point zero” approach where the connectivity of the new Internet contribute to make the world a greener place and that is what my startup (Fullcircle Innovations) is all about it.