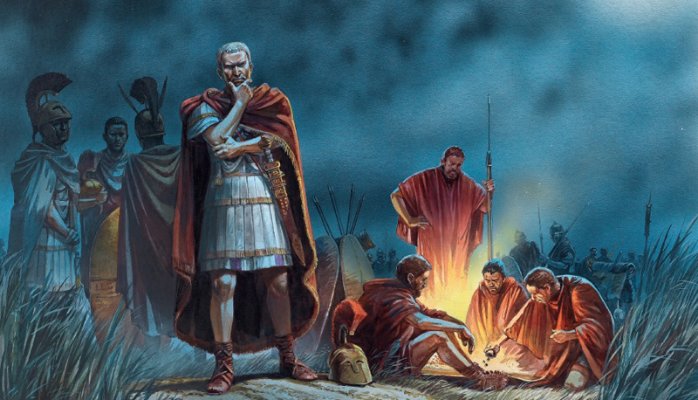 It is impossible of course to say for certain (just like 90% of our history), but it seems that Julius Caesar has been attributed to the quote “Divide et impera” which is “Divide and Conquer” in latin.

Fast forward to today, we can see that and many others Roman empire’s concepts are in every corner of our planet.

Food stamps and Sports (the bread and games; from Latin: panem et circenses, in other words: give people bread and entertainment and you can easily continue to rule).

Slavery (still exists and doing just fine, it was re-branded to “kids workers” or even “paycheck survivors”).

The Census (Every five years, each male Roman citizen had to register in Rome for the census. In this he had to declare his family, wife, children, slaves and riches. Should he fail to do this, his possessions would be confiscated and he would be sold into slavery.) Now, we have social-security numbers, “my numbers” and so on …

The Civilized City (The entire concept of Roman life seemed to center around the city, be this the city of Rome itself or any other town. The countryside was a nice place to retire to for a while in order to stay in touch with nature. Yet it was seen as an unsuitable place for a true citizen). Same as today.

The Subura (This was the poorer part of Rome, not merely housing the less fortunate) Suburbs anyone? they even kept this word very close to the original one.

Anyway, it goes on and on …

So, here is my perception, the Roman Empire never actually disappear or ruined; It just re-branded itself (new names and places but old concepts).

Today, we are not allowed to trully debate, exposes raw opinions or even pitch sparks of new ideas without being crucify.

Our society’s barons built an electronic peer to peer self regulatory fancy via our “political correctness” framework that is slightly visible (for the ones who are paying attention) and that expose anyone who tries to deviate from the traditional curve of thinking.

“Social media tomatoes” and reputation destruction (online and offline) is what you end up with if you do diverge from your peers.

Next station? : The Orwell’s land.

It reminds me of “First they came …” the famous statement and provocative poem written by Pastor Martin Niemöller (1892–1984). It deals with themes of persecution, guilt and responsibility.

First they came for the Socialists, and I did not speak out—
Because I was not a Socialist.

Then they came for the Jews, and I did not speak out—
Because I was not a Jew.

Then they came for me—and there was no one left to speak for me.

So, to illustrate a bit this uglier side of our today’s society, Spanish artist Luis Quiles draw a variety of images that combine current affairs with pop culture.

Although, I personally do not like all of his drawing, I think we need to remember what Art is all about it….

“Art should disturb the comfortable & comfort the disturbed”

Below a description of his work written by someone else.

“Quiles challenges a wide range of controversial issues ranging from homophobia, censorship and corruption to sexism, violence and even child abuse.

He conveys a powerful message through his artwork that calls upon strong instinctual human emotions, such as fear, disgust and arousal.

While his artwork may, at times, seem a bit unsettling, his images make you question the darker side of the human mind, as they capture the raw discerning truths often overlooked in our modern world”.

Take a look at some of the images below to see Quiles’ powerful drawings and for some food for thoughts.

This last one below the artist wrote the following (he lacks english fluency so I kept exactly what he wrote):

“Instagram delete my last drawing. Because for them the Nevermind cover from Nirvana is such a kind of pornography. Maybe because they are perverts.
So I made that special edition just for Mr.Instagram.
Human anatomy is not pornography.
The social network will change the anatomy rules if we continue like that.
Eunuchs everywhere”.

So, it seems history is repeating itself once again as well as the poem written by Pastor Martin Niemöller …

First they came for the artists … but THIS time, I DID speak out—
even though I was NOT one …