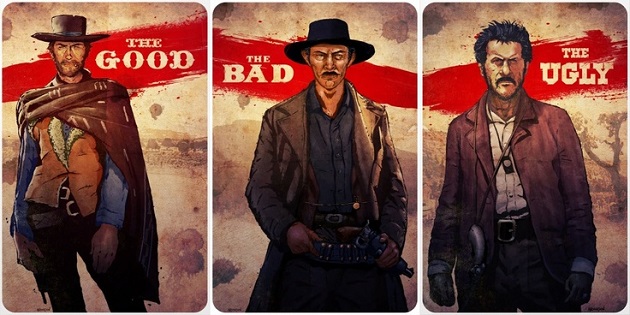 One of my favourite TV time while I was growing up, was at 3 o’clock in the afternoon, just after my elementary school in Rio de Janeiro, that was the time I used to watch Spaghetti Western (also known as Italian Western or Macaroni Western (primarily in Japan)) is an Italian-made western made roughly between 1964-1973 (there were about 500 of them, give or take a few).

Fast forwarding to today, I was thinking in terms of technologies trends which would be our good, bad and ugly. Therefore, here is my list in my humble opinion, feel free to add yours in the comment area of this post.

The Internet – Our global system of interconnected computer networks that  link billions of devices worldwide. The Internet carries an extensive range of information resources and services and it is today the closest thing we have from the ancient Library of Alexandria. Just make sure that you spend enough good time in the corridors of knowledge and less on the cats aisles, if you know what I mean.

Transhumanism (abbreviated as H+ or h+) – is an international cultural and intellectual movement with the goal of fundamentally transforming the human condition by eventually developing and making widely available technologies to greatly enhance human intellectual, physical, and psychological capacities.

In short, we are trying to mix “clay with iron” here. It will simply not work in the long run.

e-waste – The brand new tablet/smartphone/computer you just grabbed last week is great right?. But what happens to it – or to any of the devices you once treasured- when you don’t want or need them anymore? Where do they go? Is there a reliable, “green” way to dispose of them? And hey, does one extra electronic gadget in a landfill really put the big hurt on the environment?

Let’s take just one example, cellphones in general (not the latest smartphones) to give you a picture:

Once trashed, a cell phone travels to the local landfill, where it’s compacted, smashed, crunched, and/or burned until everything that was once safely ensconced inside spews out and over the course of months, years, and decades, leaches into the air, ground, and water.

Let’s check out some numbers. There are, right this very moment, more than a billion computers worldwide. Two hundred million televisions were sold is 2009 alone. Eight million dashtop GPS units were purchased in 2008. One hundred and ten million digital cameras were sold in 2009. Apple blew out 20 million iPods in just the first quarter of that same year. So, those numbers are old but can give you an idea where most of those devices will end up.

Ultimately, the big problem with responsible e-waste recycling is not that it can’t be done, but that it often isn’t. So, why do such practices do not exist more often?

In one word: Greed.

Like someone wisely pointed out : Greed’s worst point is its ingratitude.

and that is very ugly indeed.